LEVEL UP! A Speed Mentoring Night Like No Other 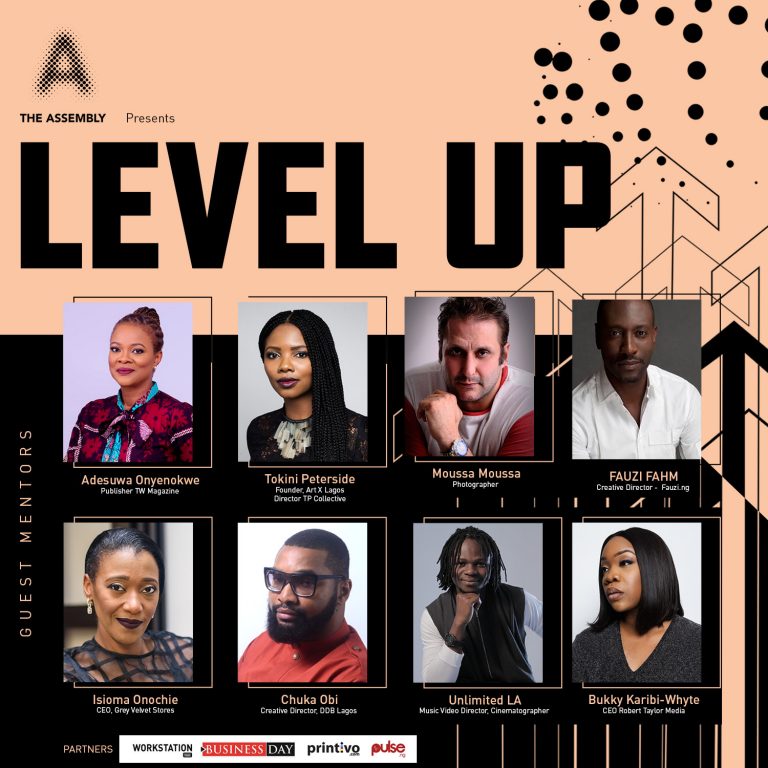 Have you heard about our Mentoring Scheme? Great! We’re officially launching it with a Speed Mentoring Night series to get you up close and personal with the best in the business. So whether or not you are part of our mentoring cohort you still get a mentored in a fun and relaxed setting.

Level Up! Is a Speed Mentoring Night like no other, whether you’re working in Fashion, Photography, TV, Publishing, PR, Advertising or Creative Direction, whatever stage you are in your career or business, don’t miss this opportunity to start the year as you means to go on.

The Event
Will allow young and established creatives and professionals – that’s you! Meet and connect with industry leaders, get career and business advice, show off your portfolios, discuss projects/ideas and network with like-minds. Basically walk away with insider insights and right steps towards fulfilling your ambitions. This is a unique chance to have a chat with trailblazers, seasoned pros, top execs, senior creatives and managers in Africa’s fashion/arts industry, directly and possibly land yourself a new opportunity.

Tokini Peterside, Founder Art X Lagos; Director TP Collective
Tokini Peterside is the Director of the TP-Collective, a consulting firm that builds businesses and brands in the culture and luxury sectors in Africa. Tokini’s client list boasts of the likes of fashion and lifestyle concept store Alara and fashion designer Maki Oh. ​​With a passion in sustaining the lifeline of Nigerian artists, Tokini pioneered one of the largest art fairs in Africa, Art X Lagos –  an art festival and exhibition designed to widen Nigeria’s connection to the contemporary art scene across Africa and internationally, and to position Lagos as an emergent cultural capital on the African continent.Tokini has become a force to be reckoned with when it comes to promoting African arts and artists. She has been described by The Times as ‘the woman putting Lagos on the art map.’  Prior to founding the TP Collective, Tokini was the notable Communication and Events Manager for Moet Hennessy managing the Media and Public Relations, Sponsorship and events for Hennessy, Moet and Chandon, Veuve Clicquot, Dom Perignon and Belvedere, and spearheaded Hennessy Artistry.
Tokini Peterside is an MBA holder from INSEAD and holds a degree from The London School of Economics and Political Science (LSE) with a First Class Honours after a postgraduate degree in Law.

Adesuwa Onyenokwe, Publisher TW Magazine
The ace broadcaster, Mrs Adesuwa Onyenokwe, started her career in media and broadcasting over 30 years ago. She started with NTA and presented for more than 15 years. She is one of the most celebrated broadcasters and leading media personalities in Nigeria.
From Today’s Woman on TV, to TW Conversations, to TW Magazines, the renowned media personality continues to make impact sharing the Nigerian stories. For 10 years till date, Adesuwa Onyenokwe has been documenting, publishing Today’s Woman Magazine, the first locally produced and online magazine that covers all aspects of life, the body, mind and soul, and celebrates the works and achievements of Nigerian women. At present Mrs. Onyenokwe is the Executive Producer and Presenter of  ‘Seriously Speaking” a weekly chat show on Channels TV and is a fellow of the Bloomberg African Leadership Initiative. Adesuwa Onyenokwe, has a BA in Dramatic Arts from the University of Ife, a MA in language of the Arts from the University of Ibadan and is a recipient of many awards including the Nigerian Media Merit, Cadbury reporter of the year, Zenith Bank Jewel of the Future  in 2016 and the Vlisco Woman of the year award in 2014.

Chuka Obi, Creative Director, DDB Lagos
Chuka has amassed almost a decade’s experience in creative functions including Copywriting, Art Direction, Illustration and Sound Design across several leading brands. Before venturing into Advertising in 2008 he was a comic book illustrator and graffiti artist. He has worked extensively on building brands like MTN, Fidelity Bank, Mouka, Knorr, Royco, Lipton, Guinness, Malta Guinness, GTAssur/Mansard, Wrigley’s, Oando, Interswitch, Verve, Quickteller, Golden Penny, Wakanow, Johnnie Walker, Orijin and many more. He is also renowned for being the writer behind the historic MTN “Saka Ports” campaign, that has gone on to win several local and international awards, and has sat on juries for curating young creatives as well as facilitating their training via the O2 Academy Lagos.

Isioma Onochie Aihie, CEO Grey Velvet Stores
Isioma Onochie Aihie, a serial entrepreneur started her career as a Systems Analyst at Fortune 50 company’s, Merck and Co and Microsoft in America and ended it as Head of IT at premier downstream oil company, OANDO. Dissatisfied with the lack of social and edutainment outlets for children and teens, she founded Funtopia, Nigeria’s foremost family entertainment centre through which she revolutionallized the concept of ‘family entertainment’. Her penchant for innovation soon led her into publishing where she created JUICE a bi-monthly magazine targeted at the upwardly mobile teen. She also had stints as content developer, producer and consultant executive in charge of production for indie productions and stations including the defunct HiTV, TVC and Bloomberg Africa.  Through this journey, she met a number of budding fashion and accessories designers and in 2012, she realised a long term desire to promote Nigerian fashion by opening her first fashion retail store, Grey Velvet, the first and only concept store to solely stock brands that are 100% Nigerian /African, at the time.  Almost 4 years later, she has opened 4 other stores as well as a garment manufacturing company and is looking to open more stores across the continent and internationally as well as continuing to push African fashion though the promotion of upcoming designers and sales of their pieces.

Moussa Moussa, CEO Envisage Studio
Starting from early childhood, Moussa Moussa has been very passionate about photography. For more than 20 years, he has grown to become one of the renowned experts in the field. His believe that photography is more than a technique, but an Art & a Mission which gave birth to his beautiful works of art. He was the brain behind the great documentary;  “life on the border of the Nile” which aired in Egypt, Beirut  & Buenos Aires; the documentary, “women in a frame” in Beirut. He has also conducted numerous seminars with brands like Kodak and Nikon. On moving back to Nigeria, Moussa has worked with top brands like MTN, GLO, Google, Heineken, Guinness, Pepsi, etc and worked with numerous prominent fashion and lifestyle publications and brands and lensed many profiles in showbiz. Moussa studied Fine Arts and Photography. He is the CEO of Envisage Studio, located in Lagos. According to Moussa,”Photography is the Art of Drawing with light, we manipulate light to express our self in a simple frame.”

Unlimited LA, Music Video Director / Cinematographer
“Olalekan Buhari, popularly known as Unlimited LA, is a cinematographer and an award winning Video Director. Unlimited LA, has been tagged as one of the best video directors in Africa started his career 10 years ago, as an assistant camera man. LA has directed debut tracks and worked with notable video directors like Clearance Peters, Adasa Cookey, Moe Musa, among others. In 2011 and 2012, he directed Black magic’s videos for the tracks ‘Rainbow’ and ‘Repete’ respectively. His big break came when he shoot Sean Tizzle’s ‘Sho Lee’ He has since directed music videos for popular artistes like Tilla man, Praize, Sean Tizzle, D’Banj, Olamide, Wizkid and many more. In 2015 he won Best Director at the Nigerian Entertainment Awards. Olalekan Buhari is a graduate of Computer Science from the University of Lagos.”

Fauzi Fahm, Creative Director Fahm.ng
Fauzi is a creative with over two decades of experience in markets as diverse as London, New York, Berlin, and for the last 10 years, Lagos, Nigeria.  His client list is extensive – locally he’s worked with leading brands in the Oil & Gas sector, Government, Construction, Real estate, Fashion and a variety of Media entities. He was Creative Director at Thisday Newspapers where he developed launch strategies of Arise Magazine and the Arise Magazine Fashion weeks. He was a television anchor for Arise News Channel (DSTV 416). Fauzi runs the creative’s collective known as Fauzi.ng – a Marketing Communications entity responsible for steering what and how audiences think and feel about their client’s products and service.
In Fauzi’s words:
I design solutions. My expertise lies in branding, marketing communications, commercial arts and media and event production.

Who is this event for?
This event is for anyone ready to take their careers and business to the next level. Those with an insatiable passion for their craft be it in – visual arts, fashion/retail, photography, TV, publishing, advertising or art direction we want you to apply. You might be working in the industry, studying or looking for your next opportunity, we want to assemble a group of ambitious people with bold ideas and who are committed to their craft.

About our Host Venue
Workstation is one of the coolest co-working spaces in Lagos, bringing a diverse group of entrepreneurs and businesses together through shared workspaces, special events, social spaces and a digital member network.

How to Register
It’s free for anyone to apply, but spaces a very limited and strictly by invitation in order to make sure all attendees get the most out of the event. Please put your best foot forward and answer all the qs in the application form so we can learn a bit more about you and make sure you’re a good fit. Only selected applicants will receive a confirmation invite with a link to purchase tickets directly.

*Registration Fees are non-refundable and non-transferable