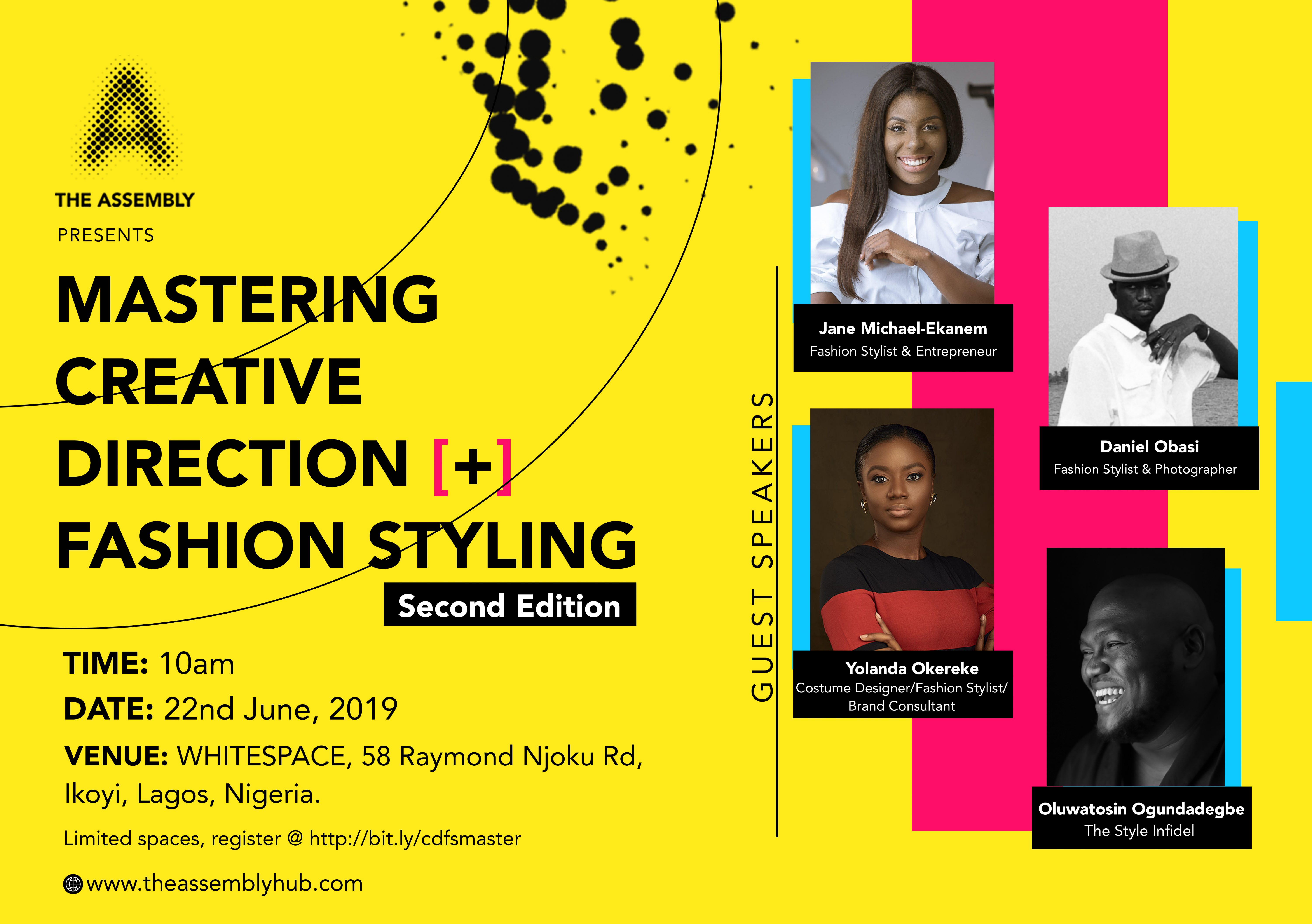 Are you a stylist looking to develop your skills and knowledge or perhaps you’re just starting out? Do you find yourself struggling with creative areas for your brand or not sure how to put together some of your crazy ideas.

Back by popular demand, we present to you the second edition of the Mastering Creative Direction + Fashion Styling Masterclass.

Our first – Mastering Creative Direction and Styling was a great success with the likes of Veronica Odeka, Ezinne Chinkata and Tokyo James. Please see visual highlights from this class here and video below.

You’ll learn how to distinguish yourself in the industry by learning the keys to commercial, editorial, celebrity and personal styling. You’ll gain insights into creative direction for campaigns, as well as fashion shows on both digital and traditional media platforms. You’ll learn how to determine your niche, charge for your services and how to respond to commercial and creative briefs.

About the Guest Speakers:

Oluwatosin Ogundadegbe is the Creative architect behind one of fashion’s fast rising brands, TheStyleInfideL.Co. The Creative Consultant and one time lead fashion writer  with OlisaTv has relentlessly worked his way from the bottom to becoming one of Nigeria’s top fashion’s-go-to editorial stylist and fashion curator. From his internship days at Thisday Style where it all began at Arise Magazine Fashion Week, Tosin has consistently described his profound love for fashion as a case of Accidental Romance gone Right.

A die-hard-lover of Sex and The City’s Carrie Bradshaw, whom he affirms as his greatest inspiration

Jane Michael Ekanem is a celebrity fashion stylist, designer and fashion entrepreneur with a capacity for unraveling fashion – related problems. With over 10 years of fashion enterprising, her expertise spans styling for music videos, magazine covers,campaigns, runways and weddings. She was also the Fashion Curator for the just concluded ‘A Celebration Of African Culture’ which hosted President Emmanuel Macron at The African Shrine’; with a slew of celebrity clientele, collaborations and accolades attesting to her achievements in the fashion industry. Head Designer and Creative Director of the JaneMichael Brand, Jane Michael Ekanem who is also a Ted-X alumni is part of a movement  of fashionpreneurs with a goal to revolutionise homegrown quality of designs, creativity and ultimately, the business of fashion.

Daniel Obasi is a 24 year old Nigerian art director, stylist and photographer whose work is deeply concerned with advancing the scope of African narratives visually.

Born in Aba and raised in Lagos, Daniel has been drawn to fantasy and alternate realities since his childhood. His first introduction to the arts was as a graphics design intern at a security company in 2012. While in University, where he studied Language, Daniel found himself developing an interest in the world of fashion, and paying special attention to how the society around him perceived gender roles and masculinity. In 2017, Daniel made his first major film and editorial work, “Illegal Project” on gender non-conforming expressions in an African setting. The project went on to launch his budding career as a Nigerian Artist who questions societal ideals on sexuality, masculinity and gender roles.

Daniel’s aesthetics are best described as whimsical, soft, ethereal and Afrocentric. His 2018 afrofuturistic film, “An Alien in town” pays homage to old African cinema and advocates for Africans to own their narratives especially with regards to foreign influences, while his fourth and latest film, Udara uses fantastical elements of storytelling to root the igbo culture while addressing the relationship between christianity and traditional beliefs.

Daniel has worked as a stylist and director on music videos, most notable of which are Major Lazer and Burna Boy’s All My Life; and Falana’s Ride or Die respectively. He has also worked with brands like Orange Culture, Iamisigo, Maxivive, Rayo ,Vlisco, Miu Miu and been been published on Vogue Portugal, Primary Paper, Modelsdotcom, ID Magazine, Nataal Media, Garage Magazine, Nii Journal, Afro punk, Indie Magazine, Hunger Magazine, Maire Claire SA, amongst others. Daniel’s film An Alien in Town was recently shortlisted for Fashion Film Festival Milano, Bucharest Fashion Film Festival and shown by Smithsonian Center at the National Museum of African American History and Culture (Washington, D.C.) He lives and works and Lagos.,

Yolanda Okereke is an independent Costume Designer and Wardrobe Stylist. She started her journey in 2005 on the set of the Movie “Sting”. On the set she dressed herself, as well as other members of the cast.
As she progressed she discovered her knack for designing starting the label Rani Gisele, whilst still in University.Evolving even more she realised making clothes wasn’t enough, she caught the Styling bug and started a new path in Fashion Styling. Which then took her on a journey back to her first love, Filmmaking and becoming a Costume Designer.

Today, Yolanda designs and styles for film, theatre, and commercials. Her design credits include La Femme Anjola starring Rita Dominic, King of Boys starring Sola Sobowale, Adesua Etomi and Sani Muazu, The Wedding Party 1 (which premiered at TIFF 2016) & 2, and Oloture produced by Ebony Life Films talking, a film shedding light on the issue of Women Trafficking and the world of prostitution in Nigeria. Others include The Ghost and The House Of Truth, an independent feature film produced by Temple Productions & Ego Boyo Films, directed by Akin Omotosho, starring Kate Henshaw & Fabian Lojede. She also has the popular MTV show Shuga, directed by Tolu Ajayi, Tope Oshin and Ishaya Bako on her resume.

Great! Book your place now (very limited places) via the link above and come prepared to do some learning, sharing and connecting.

You can also Register here